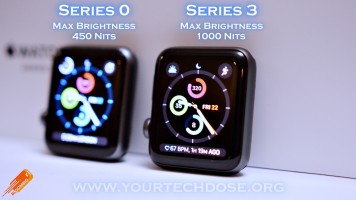 Apple unveiled the latest generation of Apple Watch, Series 3 in the fall of 2017. During its keynote, Apple shared all the new tech and features that makes it a great smartwatch. The biggest highlight was its cellular capability, which essentially makes it independent of an iPhone. However, there’s a catch, actually couple of them. Firstly, cellular connection on Apple Watch is supported in limited countries only. Secondly, you need to pay an extra subscription fee to utilize cellular services on your Apple Watch Series 3.

Essentially, Apple Watch Series 3 looks the same as all its predecessors. It is a tad bit thicker than the original Apple Watch but considering all new elements packed inside its shell, that’s quite an achievement. Apple has also added an extra speaker on the side to eject the water out of the watch once it has taken a dip. Although the screen size haven’t changed but screen brightness has increased significantly. It is up from 450 Nits in the original Apple Watch to 1000 Nits in Series 3. It does make a visible difference especially in broad daylight.

How Good is its Cellular Connection?

Apple has once again found an innovative way of integrating the cellular connection to Apple Watch. For starters, you don’t need to insert a physical SIM inside the watch. Instead, it utilizes the same LTE connection as your iPhone through an e-sim. Which means, if you are away from your iPhone, you would receive all calls/texts directed to your iPhone’s SIM on your Apple Watch. It makes the entire process hassle-free and user friendly. However, Apple hasn’t perfected it yet. There were a lot of instances where the signal dropped or it took a lot of time to fetch social media updates.

Is it good enough to upgrade?

Apple Watch has seen quite a lot of improvements throughout its life cycle. While the first-gen watch showed the world Apple’s take on smart watches, it lacked the seamless delivery of performance. Speaking of performance, the boot speed comparison of Apple Watch Series 0 and Series 3 showed a massive difference of 2 minutes. Take a look at it below.

Although, Apple provided incremental updates in all its new generations of Apple Watches, but Series 3 actually delivers the user experience that users always longed for. This is partly due to the integration of new S3 Chipset and a little boost in its RAM to 768MB from 512MB (Series 2). These specs coupled with Watch OS 4 makes it one of the best smart watches in the market.

During WWDC, 2018, Apple showcased WatchOS 5 and it adds even more features than the current WatchOS. However, it would no longer support the First-gen Apple Watch, probably due to its outdated specs. Hence, it seems like a perfect time to grab the latest Apple Watch Series 3. It starts from $359 in the US and around 47,000 PKR in Pakistan.

Is Apple Watch for you?

Furthermore, Apple Watch serves as a great fitness tracker. From tracking your grueling workouts at the gym to swimming with your pals at the local pool. It will give you a pretty accurate picture of your workouts. With WatchOS 4, it can also tap you from time to time to remind you to take a breath. In essence, it is a great accessory for health-conscious people.

Lastly, with the introduction of Cellular version, Apple has taken portability to another level. You are no longer dependent on your iPhone to make or receive calls. LTE connectivity ensures great use of SIRI commands. Although the quality of Apple Watch’s microphone is pretty good but for clearer communication, it can seamlessly pair with Apple AirPods to provide better communication.

During our extensive testing of Apple Watch Series 3, it has proved yet again that it is the best smart watch for an iPhone user. Although, it’s rectangular design is not liked by many, but with time, it’s impressive functionality has overshadowed its rather different design. Besides, you could always customize your watch face as per your liking.

As far as its performance goes, it provides an exceptionally well user experience. There are no occasional jerks or hiccups and WatchOS 4 is extremely fluid. Recently, Apple Watch Series 3 was also declared the Best Smartwatch for iPhone (reviews.com)